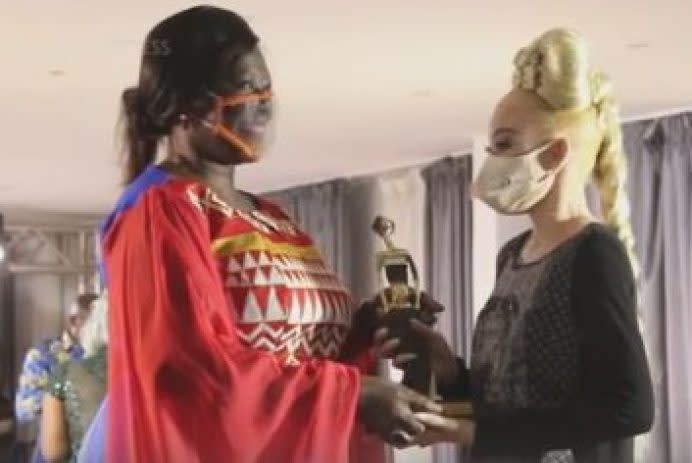 
Models with albinism are fighting stigma in sub-Saharan Africa.

Mony-Love Mbanzoulou and Jules Makosso are both 24-year-old models with albinism. The two friends were selected to parade in an international fashion show in Congo Brazzaville in order to fight against the stigma of the disease.

Albinism is a genetic difference that causes a lack of pigmentation in hair, skin, and eyes. This can cause additional sensitivity to the sun and bright lights. People with albinism may have low vision and a higher risk of developing skin cancer. Albinism is particularly prevalent in sub-Saharan Africa. According to the Associated Press, 1 in 1,400 people in Tanzania and 1 in 1,000 in some populations in Zimbabwe have albinism. Compared to the United States, it’s one in 18,000 to 20,000.

Congo Brazzaville Fashion was organized to commemorate the International Albinism Awareness Day on June 13. The experience left Makosso with a sense of pride.

It’s important to stay hydrated – and these gadgets will help keep you on track:

“It makes me happy, and it makes me proud of myself, to know that I have worked hard to get here,” Makosso told The Associated Press. “It was not an easy thing. It meant I had to work a lot to get there. The result makes me feel good. It gives me pleasure to make proud my relatives, my parents, those who support me.

Meanwhile, Mbanzoulou, who started modeling in 2016, has approached the sometimes hostile industry with ferocity.

“It’s not really easy, but we’re doing well,” Mbanzoulou told The Associated Press. “I am mentally prepared because since I was little, my father made me understand what type of skin I have. Often when I walk in the street, when I am provoked, these little clashes, it doesn’t bother me, I’m already used to them.

Mbanzoulou and Makosso are both represented by Bethy Yaca, who manages models with albinism.

“It’s not just Mony and Jules. There are others [models with albinism] who have difficulty finding work. Our first goal was to help them familiarize themselves and find a place for them in society, to encourage them to have self-confidence, ”Yaca told The Associated Press.

People with albinism are not only subject to stigma regarding their appearance, they are often marginalized due to superstitions and mistaken beliefs.

During the fashion show, which had the theme of the pandemic “under mask”, Mbanzolou was unmasked as the winner of the 2021 prize for female talent. The recognition encouraged the model to continue her career.

“I don’t think I will quit again because originally I didn’t want to participate in this competition. I was not ready, ”admitted Mbanzolou. “It was my godmother who encouraged me, who gave me the strength to do it, so I’m really happy.

Do these products we talked about actually show up on darker skin tones? :

In The Know is now available on Apple News – follow us here!

Activism is not limited to the front lines, you can donate to these 15 LGBTQ + organizations led by blacks to help change.

More from In The Know:

What the hell should you get your dad for Father’s Day? The focus group weighs

The future dad is horrified by the balloon lesson on labor and childbirth: “My wife gives birth in 7 weeks, it’s terrifying”

The post Albino Models Fight Stigma at Congo Fashion Show appeared first on In The Know.