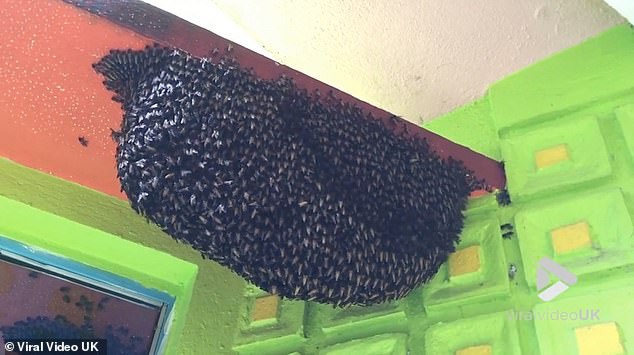 Amazing moment, a swarm of honey bees makes a ‘Mexican wave’, shaking their behinds in unison

Take off! Amazing moment, a swarm of honey bees makes a ‘Mexican wave’, shaking their behinds in unison to ward off potential predators

By Isabella Nikolic for Mailonline

This is the incredible moment when a swarm of bees shows off their defensive tactics by executing a “Mexican wave” to ward off predators.

Bees that live in an open hive use this unique technique as a warning signal to potential intruders.

The bees momentarily arch their abdomens and flap their wings to spread a ripple across the densely filled honeycomb. 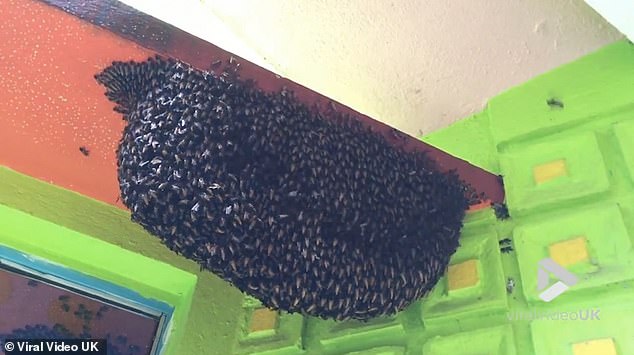 Honey bees lift their abdomens in the air and shake them while flapping their wings to ward off major predators like wasps and hornets.

Wasps and hornets are the primary predators of bees – they are known to invade hives and steal white grubs or to eliminate unsuspecting solitary bees working in open nests.

The tactic is mainly used by giant bees, native to southern and southeastern Asia.

While the defense looks like a Mexican wave, the technical term is known as “shimmering.”

Naturalists have always assumed that shimmer was a defense mechanism used by bees to ward off hornets, but it wasn’t until Gerald Kastberger of the University of Graz in Austria published an article in 2008 that their theories were confirmed.

If a hornet or wasp manages to penetrate the bee barrier, they will use a different tactic to defend their comb.

A bunch of bees will grab the intruder and start vibrating their wing muscles in a motion called a “heat ball.”

The vibration of the wings heats the body of the bees to around 113 ° F and cooks the predator alive.