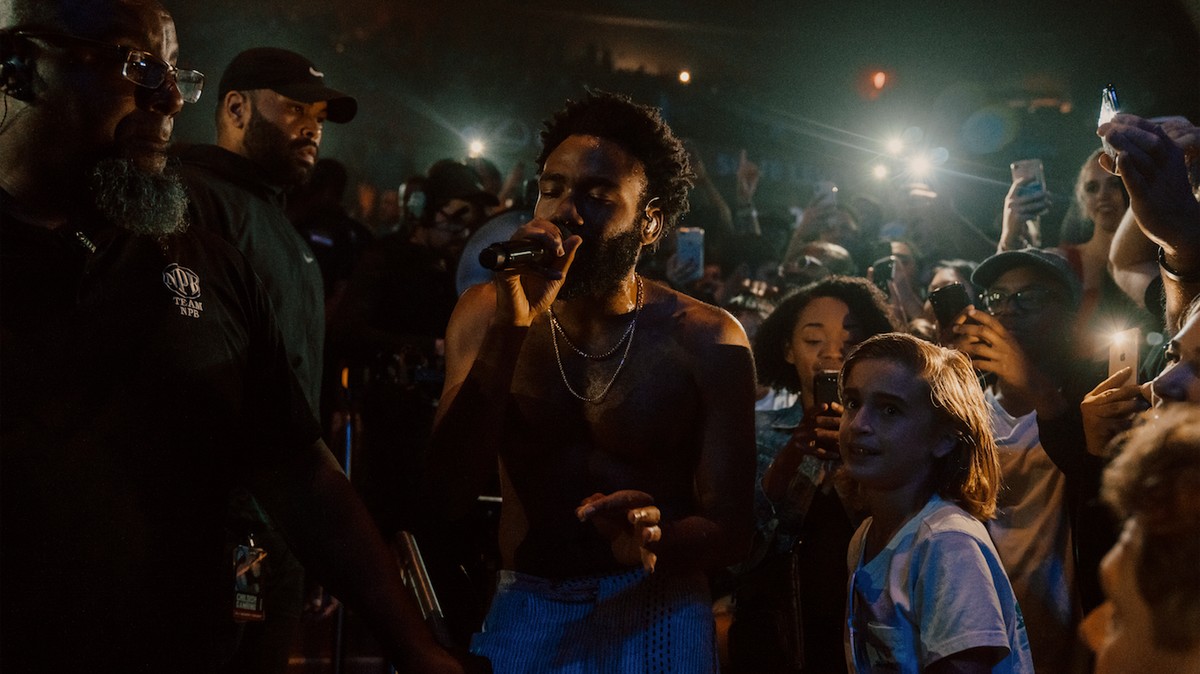 The night before Childish Gambino performed “Redbone” at Madison Square Garden, he sang it to Rihanna. Twitter had a good laugh at the idea that someone as cool as Rih could turn out to be an absolute fangirl, joining in the obligatory roaring chant that accompanies her first verse, her voice seemingly a few decibels louder than Gambino’s. Twenty-four hours later he was singing the song in front of me.

Whether you’re a first-day fan or a casual fan, this was the moment we’ve all been waiting for: nothing compares to an arena as big as MSG singing “Get your money, black man” in unison. But, in truth, we were delighted ever since Donald Glover took the stage. Last January, the Atlanta Star announced that he would stop making music under the nickname Childish Gambino, explaining during the promotion of the series that he wanted to continue under the pseudonym “would no longer be punk”. “As much as ‘Redbone’ is a punk song because it’s a gospel song that goes on the radio,” he explained to the Huffington Post. “I’m like there is only one limit to what you can go before you are on the radio.” It was both my first and last Gambino concert, and I was curious how this man, who seemed to elevate his art in every way, would succeed once again in subverting the expectations of his audience. From the moment a shirtless Childish Gambino appeared, silhouetted against a background in a ray of light of utter darkness, The Garden was about to change. Childish Gambino took us to church.

Cries of “Gam-bino!” Emanated from the crowd as the stadium began to vibrate with the sullen and massive synths that appear at the start of “Algorhythm”, a new track the rapper shared with viewers ahead of the start of his This is America tour. In a declaration issued to ticket holders via Live Nation, he noted that the song was not complete, but that it was important for his fans to know it in advance, for “the experience”. “Please don’t share these songs,” he wrote. “Keep that within our community. “

For two minutes, Gambino stood still, resolutely not singing on the track. “A voice keeps telling me / That we must be / That we must be / Free,” we heard him hum on the recording. With these words, Gambino woke up, falling into the kind of broken dance moves he had shown us on “This is America”. Produced by Ludwig Göransson, the Swedish composer behind the Black Panther score, “Algorhythm” seems very much in tune with Kanye West’s dark use of synths, until Gambino sheds light on it by interpolating Zhane’s 1993 song “Hey, Mr. DJ”. “Everyone move your body, now do it / Here’s something that’s going to get you moving and grooving,” he sang. The crowd seemed to have done their homework; judging by their vocals, you wouldn’t be able to guess that the song was still unreleased.

As the song drew to a close, he addressed the crowd for the first time that night. “If you bought a ticket for this concert, it means you bought a ticket for Gambino’s last concert,” he says. Crowd reactions were mixed: some people shouted “No”, not wanting to let this time go by, while others applauded, seemingly grateful for all their idol had accomplished. For me, there was something about this being my first and last Gambino gig that made it bittersweet: I wanted to see what everyone around me had known for years. Before continuing, he made just one request to the crowd, which could have gone more smoothly a decade ago: No recording. “This moment is for us here, not for them there. It’s not a concert. It’s the church, ”he said. “If you’re not here to have fun, you should go home right away.”

Later in the shoot, crowds flocked to 2013’s “Worldstar,” one of his first hits and a time capsule for when WorldStarHipHop reigned supreme in video content. For a second, I was triggered; as far as I can remember, the phrase “Worldstar” had only been shouted before the events that triggered your fight or flight response. The crowd grew angry and sifted moshpits began to form on the arena floor; a woman seated in a few seats threw a pair of black panties towards the stage. It might not have been the brawl that WorldStarHipHop is known for, but the energy inside the arena seemed to be triggering something in Gambino as well. He had pissed us off to the point that few seemed to notice that he had crept backstage somewhere, with a film crew following him as he greeted and smiled at the bartender staff outside the stage. .

The behind-the-scenes footage, as blunt as it might sound, was a reminder that Childish Gambino was not just a rapper or singer; he was also actor Donald Glover. His ten-piece band played a bluesy-funk instrument as he toured the arena, leaving us wondering when he would be back on stage. When he reappeared, he was with us. “I just wanted to get a better view,” he said quietly, standing in the middle of the arena. He exchanged friendly jokes with his fans, filming the cameras with the occasional straightforward stare during moments of comedic relief. Childish Gambino is who he wants to be: a musician, an actor, a comedian, a church leader and even an idol.

Still, Gambino still seemed to figure out that he had cultivated enough followers to fill Madison Square Garden for two nights. After walking around the arena, he knelt down at the edge of the stage as if it were an altar, and began to talk about how far he has come since his days as a student of writing. dramatic in Tisch at the beginning of the years. “I used to come here to see some of my favorite rap groups when I went to NYU,” he recalls. “You don’t all remember those times, but rap was like a little thing for a long time. Even when I was a kid, people would tell me, “Yes, that’s what kids do. Here he stopped and looked up at the crowd: “Be yourself because dreams come true.” Then he re-imagined his Funkadelic-inspired song “Riot” in 2016 as if it was for a black church, with a coordinated helping hand and stomping that only the Holy Spirit could induce. Over time, what started out as a sparse instrumental arrangement began to resemble the psychedelic production of the recording, and the song grew bigger and bigger. “I told you we were at church,” he said. The crowd imitated him, and for a minute it was like a church.

His sermon didn’t end there, however. After switching between the tracks of Wake up my love and new summer outings, he dropped a pace that surprised the stans in front of me. It was half-electronic, half-dark synths and drum kits that sounded straight out of 808 and heartache. This is something new that I have been working on, ”he said. It was a song that fans began to call “Spirits”, and it ended with Gambino repeatedly chanting the following words. “Oh great spirit / Can you hear me? / Do you love me? / Can you hold me back? The fans in front of me had quickly learned those words, and they were screaming in ear-ringing octaves — jumping up and down together as if they had known each other their entire lives, as elated as Rihanna had been the day before. It is the gospel of Gambino.