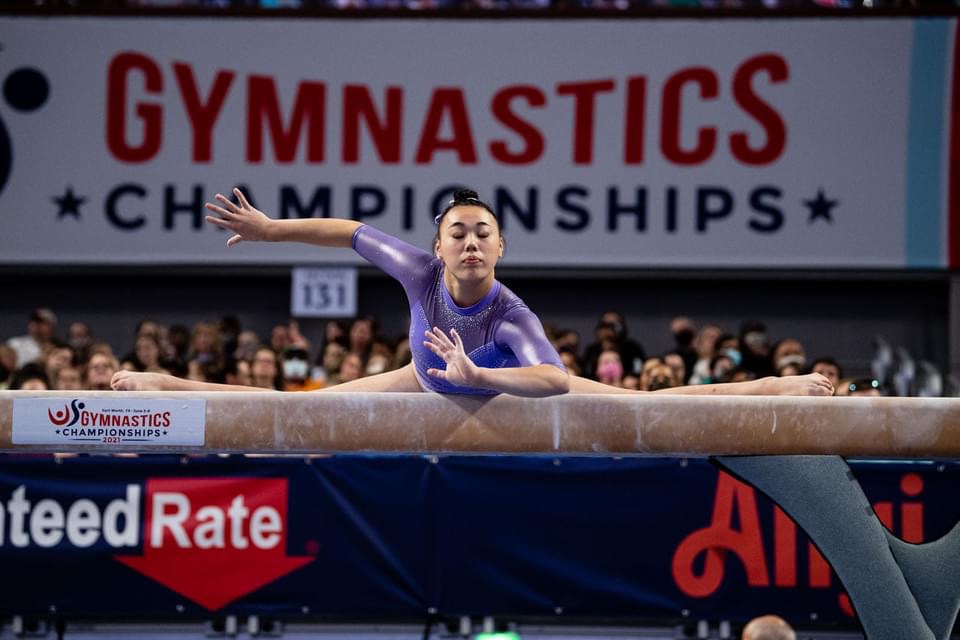 
Los Gatos resident Emily Lee is one of 18 women on the senior national women’s artistic gymnastics team vying for a berth at this year’s Olympics.

She will compete in the US Olympic Gymnastics Team Trials in St. Louis, Missouri later this month. Lee’s road to the best competition in the country has been paved with hard work, enough to feel like a full-time job for the 18-year-old at times. And it all started with a well-placed coupon.

When Lee was 6, his father found a coupon in the newspaper for a free lesson at West Valley Gymnastics School in Campbell. He took her to her first class and she cried until he brought her home. They tried again, with the same result. It wasn’t until a family friend took her away that she finally gave it a shot.

“It’s ironic, actually, because my dad said to me, ‘Oh, a free coupon for a gym class!’” Lee said. “He had no idea that this course would cost him thousands and thousands of dollars over the years.”

Lee had tried other sports before. She started swimming on a local team, but she didn’t really like it. She was doing ballet, but it was too slow for her liking. She was more of a fearless kid, still bouncing off walls.

Lee spent most of his childhood in intensive gymnastics programs, determined to reach elite levels. She frequently visited the Karolyi Ranch in Texas, where elite gymnasts would train. She was sidelined by injury for two seasons, but recovered and got back on track. She has found her specialty on the beam.

After COVID-19 postponed the 2020 Olympics, which were to be held in Tokyo, qualifying competitions for the international tournament were postponed until early 2021. Lee passed two requalification rounds for the national team and has was selected by a committee to participate in the Olympic Trials, which will take place June 24-27.

When the Olympics were canceled, athletes training to compete found themselves in a difficult situation. Lee said that at the start of the 2020 season, she felt confident. Then she was forced to stop training just as she started to peak. Throughout the year, restrictions would decrease, only to get back in place as COVID-19 rises again. The result was a hesitant and confusing training experience for Lee.

Ultimately, the past year helped Lee take the time to rest and recover from a life of intense training. Lee’s typical diet is six days a week, totaling over 30 hours.

“It kind of helped me let my body rest and let go of all the nagging injuries,” Lee said of his downtime. “I had time to heal which was really good.”

Lee’s coaches Paul Duron and Judy Sun were by his side during the chaos of the pandemic. In fact, they’ve been by his side for much longer than that, training him for nearly a decade.

“They really are like my second parents,” Lee said.

Sun and Duron have been at West Valley Gymnastics School since 2008 and 2009, respectively. They watched Lee go from a promising young girl to an elite gymnast, guiding her through the day-to-day journey.

“As it became more and more obvious that she was going to be fit for (elite) training, so we basically took her into our group and started working with her from there,” Duron said.

Much has changed since Lee entered West Valley Gymnastics School. This year, Lee completed an online high school program she had been participating in since her sophomore year. More than traditional school, she said the teachers in her program understood her busy schedule, so she was able to focus on her studies in a way that didn’t take away from her love for her sport.

Lee’s mother, siblings and extended family will be at the Olympic trials at the end of the month to cheer him on. Of the 18 girls competing, 10 will pass: a team of four, two individual places and four substitutes.

Regardless of the outcome of the trial, Lee will begin school at UCLA in the fall, where she will be part of the gymnastics team. She plans to study physiological sciences.

“I love the campus,” Lee said. “I like all the girls [on the team] represents, and the coaches are amazing. I would not choose to go anywhere else.

West Valley Gymnastics School launched a GoFundMe to help its gymnasts, including Lee, pay for their travel this season, after the gymnasium was hit due to the COVID-19 pandemic.