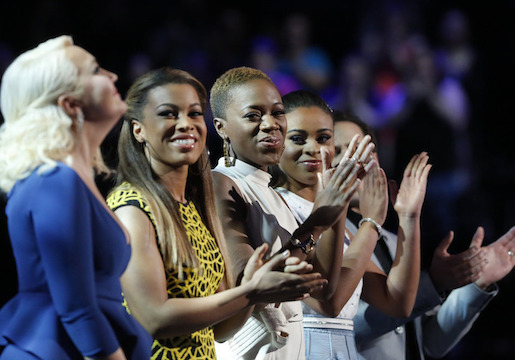 Maybe it’s time to stop saying The voice does nothing to promote its alumni (although none of them have achieved Carrie Underwood – or Kelly Clarkson – or even Chris Daughtry’s) success.

Of course, Tuesday’s Top 6 results included a random (and never-ending) interview with the cast of the Entourage movie (did I hear the one with the hair call it a “Bigger, more epic, better… fantastic ride”?). But the hour-long telecast also made room for performances from four former contestants – Vicci Martinez from Season 1, Avery Wilson from Season 3, Jacquie Lee from Season 5 and Season 7 Champion Craig Wayne Boyd.

So let’s say “thank you! To Mark Burnett & Co. for giving us a tempting pu-pu set of tunes from a wide variety of genres. (I won’t lie: Vicci’s “Bad News Breaker” was my favorite, although the fascinating designs carved into Avery Wilson’s hair were quite memorable as well.)

And yes, while the outcome of this week’s Twitter save was as painful as a baseball bat to the shin, let’s keep in mind that maybe in a season or two, the sixth of Season 8 will be back. on stage shaking our faces with a new single. So instead of “I never watch that damn show again!” –I’m going to take the road less traveled and give thanks for being introduced to an exciting artist whose name I wouldn’t know without the help of NBC’s reality singing contest.

Naturally, I did what I could with just 140 characters, as evidenced below:

Alas, all was in vain.

All right, it’s up to you. What do you think of the Top 6 results? Did America get it right with the Bottom 2? Has the good artist been saved? Otherwise, what would you have done differently? Sound off in the comments!